Should I use American Community Survey data for this?

The annual ACS 1-year releases only includes places with a population of 65,000 or more. That means that almost 75% of US counties are not included in the 1-year release. (See a map of counties published in ACS 1-year estimates.) To analyze all counties requires using data collected over 5-years, which may obscure important patterns or changes.

To address this, the Census Bureau conducts the Small Area Income and Poverty Estimates (SAIPE) program. SAIPE produces annual estimates of children in poverty for all states, counties, and school districts, as well as median household income for states and counties. 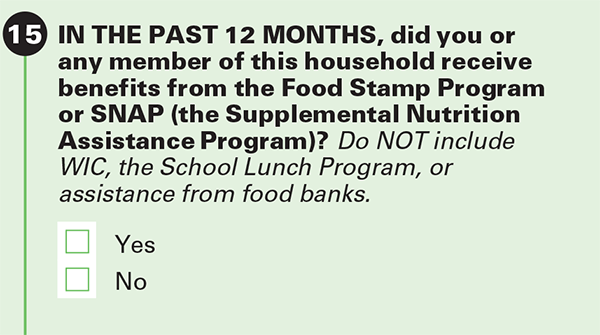 These tables address the topic of poverty. Note that, while conversationally, people refer to the poverty level, there is no single number. The Census Bureau computes 48 different poverty income levels, based mostly on family size, and, for 1-2 person households, separate numbers for senior citizens. For more details, including links to the specific poverty levels, see How the Census Bureau Measures Poverty.

Some people call out the official poverty income levels as being very low, pointing out that many people who are not officially living in poverty still have a hard time making ends meet. Tables referring to "ratio of income to poverty level" can help to get a broader count of people experiencing economic hardship. (See also housing tables presenting housing costs as a percentage of household income.)

Some table names have been simplified. References to poverty status/level or receipt of food stamps/SNAP are always for the last 12 months.

Some table names below have been simplified. References to poverty status/level or receipt of food stamps/SNAP are always for the last 12 months.